For a number of years I did booking and management for Bands in Memphis, TN. I handled all Hard Rock Café for a few years as well as booking in the New Daisy and a number of other clubs up and down Beale Street. After many years of managing and booking I stopped and have never looked back… Well not completely. I still love working with bands and have helped a few bands with some label and booking contacts I still have ties with, but for the most part that is my past.

I started The LowEnd in late 1994. It was a hobby I started on my parents computer after I came back from UT Knoxville my freshman year. I was 20. I graduated from University of Memphis with a Marketing degree years later. I never really thought much of it at the time but met a lot of guys all over the country and did a little trading. Many times it was an even swap or a few bucks here and there, but I never really thought much of it more then getting a chance to check out high-end basses. Like most, there wasn’t much to check out locally, so it was always cool to try something new. Harmony-Central was really the only place for music gear classifieds. No stores had sites at that time and there sure wasn’t any eBay, TalkBass or anything else of that nature. Heck, up until around 97 or so the only guys that even had any type of business websites was me #2 (LowEnd), Dan Lenard #1 of Luthier’s AccessGroup, Steve Barr #3 of the Dudepit. Its was a small world then and scams weren’t even thought much of at that time. Heck, businesses were just starting to get websites, and eBay was something small. Funny times to look back and how far things have come.

Here is some more information about some of the people I currently work with, or have in the past. 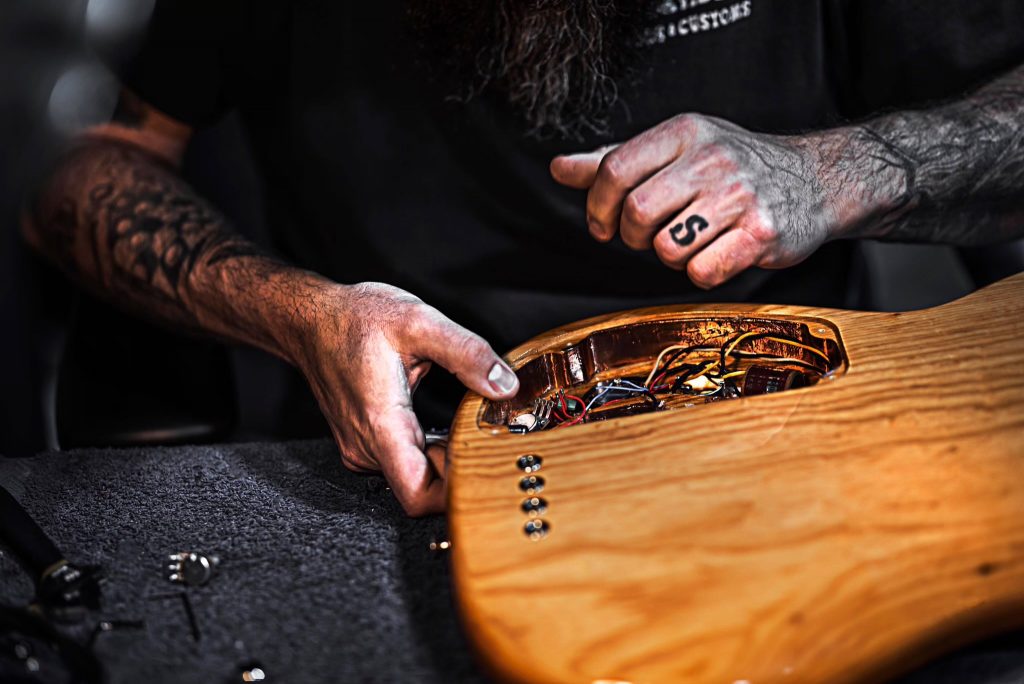 In the late 90’s, I worked with Matt Friedman from Acacia Instruments. Matt was an amazing bass builder and taught me a great deal about basses, woods, construction, etc. I help in design and R&D work with different construction idea’s from multi wood fingerboards to neck profiling on thumb ridge ideas. I started working with active on-board preamp and pickups in the Acacias. I introduced Matt to Larry at Aero pickups which were used a bit, in the end with Lanepoor pickups going out of business. I also Introduced Matt to the J-retro and U-retro/East preamp.

In summer of 2003, I hooked up with Tony of Incase after Summer NAMM in pursuit of the ultimate case for Benavente Guitars. Incase was a new company just coming out with some amazing looking bags. After receiving the first bag I was blown away by the cases, but unfortunately they would not hold most basses because they had been designed with Tad’s (Blues Traveler) Modulus in mind. Tony, turned me to Bobby at Incase who does designing, and Bobby and I worked on the new Slim and DUB Incases for about 3 months (these would fit almost all basses as well as the Benavente Case’s which differs slightly). Incase is an amazing company with some of the nicest guys in the business!

This was the first venture for Benavente Guitars to build outside of the box. After the LEJ’s took off Benavente guitars Started Divinity Guitar Works as a total custom side to Benavente Guitars. This has also lead to other custom builders requesting that we build their necks and bodies. You never know what your playing under that brand name =) Chris and I try to keep an open mind on how we can always help the player in design idea’s and function… no matter what the headstock name.

Summer NAMM 2002, while showing instruments in the SIT booth I talked with Eddie and Tim about making me a 165 low F# string (which they had not done). Eddie said to give him some time on coming up with a plan because he would need Piano wire to hold a string that thick, and a standard core would not be as efficient for a gauge that large. This was the build up to the first SIT 165 for Winter NAMM 2003. This string was on a 6 string Benavente SC. This was also the first for what became a true niche market SIT fell into, with ERB player’s and going beyond the 165.

In 2004 I started working with Alfonso Iturra Basses and D’Alegria basses as a distributor. I was responsible for setting up the Instruments physically for the US Market; as well as, arranging the pricing and marketing for the product to be marketed and sold in the US. Alfonso Started Building his Instruments with Benavente Pickups and Benavente preamps. This was the first time we took our In house Built Benavente preamp to the open market; as well as our Benavente Pickups. Now, they can be found in many other brand instruments

John East, who first made the J-retro preamp, was a jazz plate drop-in preamp introduced to me by Steve Barr. I liked the preamp so much I started hounding John to build the preamp with flexible cables and no Jazz plate. This is how the U-retro came about. I gave the name “East Preamp” due to disliking U-retro. I felt that a preamp of this quality needed a name verse a generic term. Many people today still refer to the U-retro as the East preamp. Later, I started installing the U-retro in aluminum boxes as an outboard box. I contact John a number of times to create this box, but he kept denying building an outboard boxes. After many request for the external box, I built a few which I sold to customer and became an unfortunate breakup in relationship between John East and myself. Years later John did come out with an external preamp box. It’s a great unit and selling wonderfully, as does the U-retro and J-retro thanks to Steve Barr and his time and money spent in promoting the product.

In the first half of 2004, I worked with Jorg Schroeder designer of Schroeder cabinets in marketing and pricing idea concept for the product with some basic R&D work on final product. I helped Jorg in distribution of the cabinets as well as marketing them direct to the consumer. I also showed the Schroeder cabs for the first time to the public in 2004 at Summer NAMM. Jorg and I had been friends for years and was honored when he contacted me with his proto-types. Jorg, being a busy LA Bassist knew he had something that would rock the world… and he did! Then, with the Introduction of the Schroeder Lights a year and a half later, he blew the bass community away again.

I started working with Les Plopa (Kern preamp engineer) in 2003. Les and I worked on the unit for a year before I pulled the unit and began the venture with Paul Sanchez. Paul has been a great help with the basic engineering side of the True-Voice. Today, the True-Voice preamp consist of the small desk top unit, the rack mount version and plans for a Studio Tube head. It has taken a lot or learning on my part on audiophile technology, and how many different ways I can rewire a preamp section to sound totally different. It’s been a great learning process for me and I think I am building one of the most amazing preamps for those looking for true tube tone and EQ!